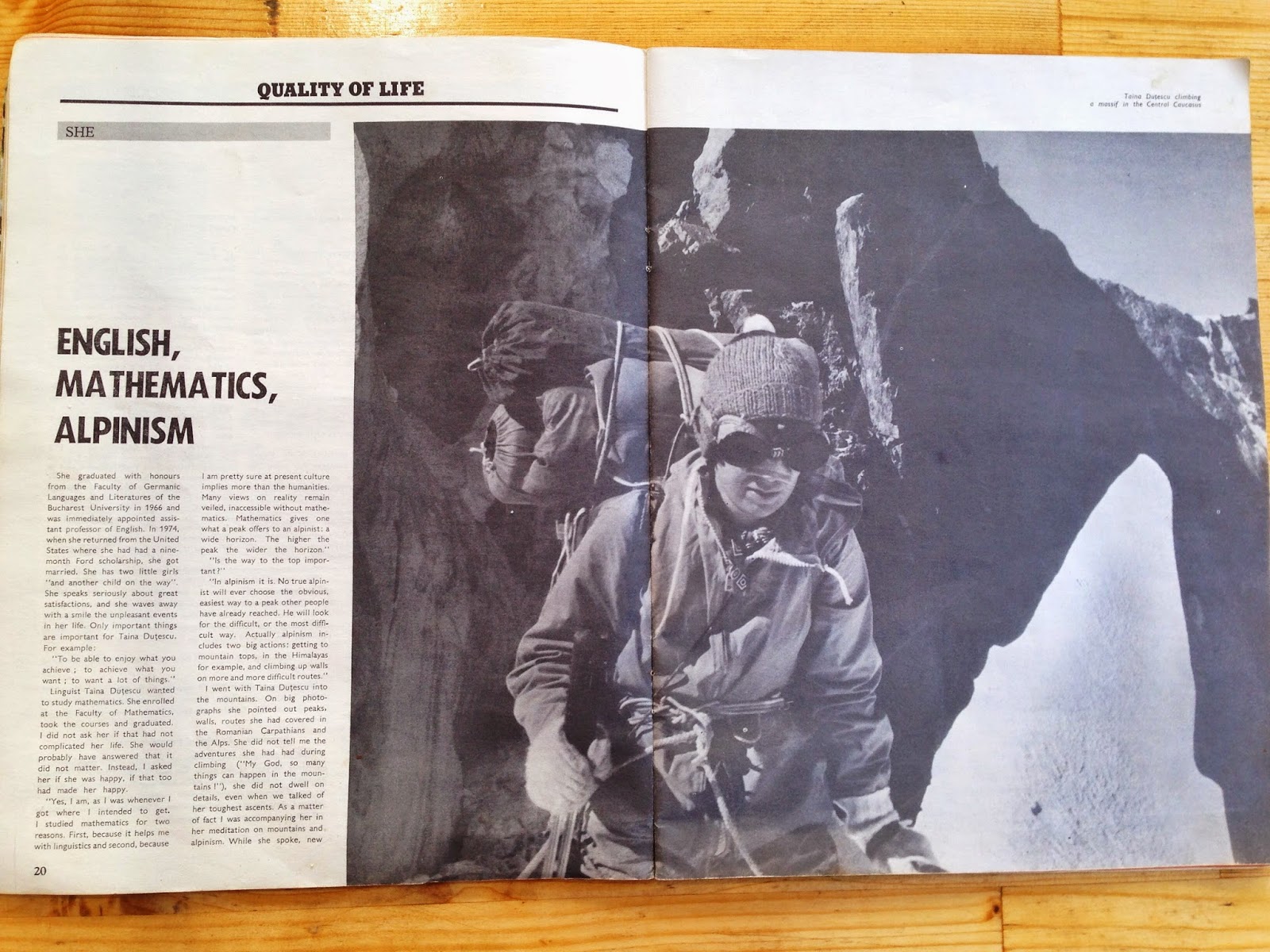 She graduated with honours from the Faculty of Germanic Languages and Literatures of the Bucharest University in 1966 and was immediately appointed assistant professor of English. In 1974, when she returned from the United States where she had a nine month Ford scholarship, she got married. She has two little girls "and another child on the way". She speaks seriously about great satisfactions, and she waves away with a smile the unpleasant events in her life. Only important things are important for Taina Duțescu. For example:
"To be able to enjoy what you achieve; to achieve what you want; to want a lot of things."
Linguist Taina Duțescu wanted to study mathematics. She enrolled at the Faculty of Mathematics, took the courses and graduated. I did not ask her if that had not complicated her life. She would probably have answered that it did not matter. Instead, I asked her if she was happy, if that too had made her happy.
"Yes, I am, as I was whenever I got where I intended to get. I studied mathematics for two reasons. First, because it helps me with linguistics and second, because I am pretty sure at present culture implies more than the humanities. Many views on reality remain veiled, inaccessible, without mathematics. Mathematics gives one what a peak offers to an alpinist: a wide horizon. The higher the peak the wider the horizon." 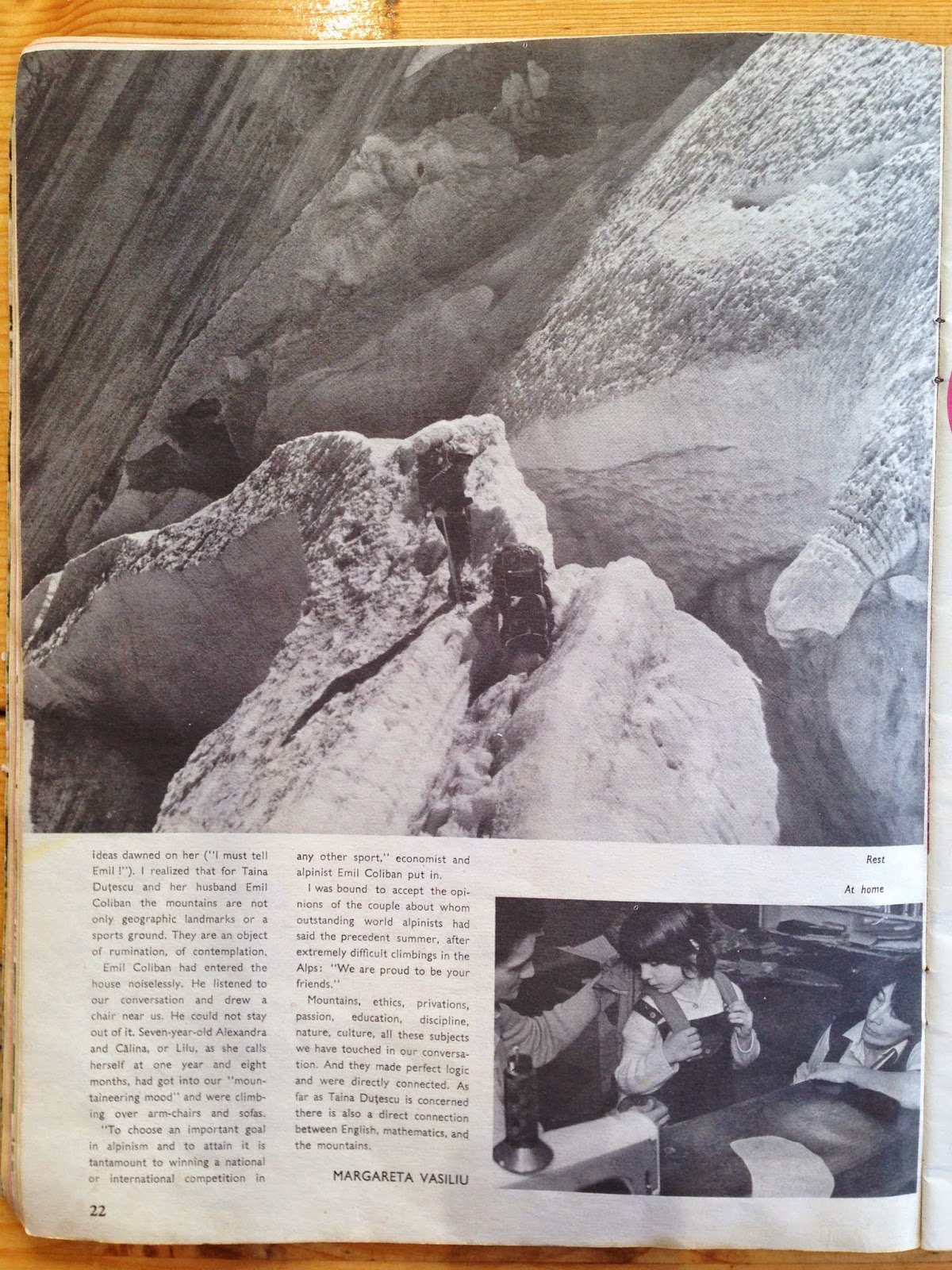 "Is the way to the top important?"
"In alpinism it is. No true alpinist will ever choose the obvious, easiest way to a peak other people have already reached. He will look for the difficult, or the most difficult way. Actually alpinism includes two big actions: getting to mountain tops, in the Himalayas for example, and climbing walls on more and more difficult routes."
I went with Taina Duțescu into the mountains. On big photographs she pointed out peaks, walls, routes she had covered in the Romanian Carpathians and the Alps. She did not tell me the adventures she had had during climbing ("My God, so many things can happen in the mountains!"), she did not dwell on details, even when we talked of her toughest ascents. As a matter of fact I was accompanying her in her meditation on mountains and alpinism. While she spoke, new ideas dawned on her ("I must tell Emil!"). I realized that for Taina Duțescu and her husband Emil Coliban the mountains are not only geographic landmarks or a sports ground. They are an object of rumination, of contemplation.
Emil Coliban had entered the house noiselessly. He listened to our conversation and drew a chair near us. He could not stay out of it. Seven-year-old Alexandra and Călina, or Lilu, as she calls herself at one year and wight months, had got into our "mountaineering mood" and were climbing over arm-chairs and sofas.
"To choose an important goal in alpinism and to attain it is tantamount to winning a national or international competition in any other sport," economist and alpinist Emil Coliban put it.
I was bound to accept the opinions of the couple about whom outstanding world alpinists had said the precedent summer, after extremely difficult climbings in the Alps: "We are proud to be your friends."
Mountains, ethics, privations, passion, education, discipline, culture, all these subjects we have touched in our conversation. And they made perfect logic and were directly connected. As far as Taina Duțescu is concerned there is also a direct connection between English, mathematics and the mountains. 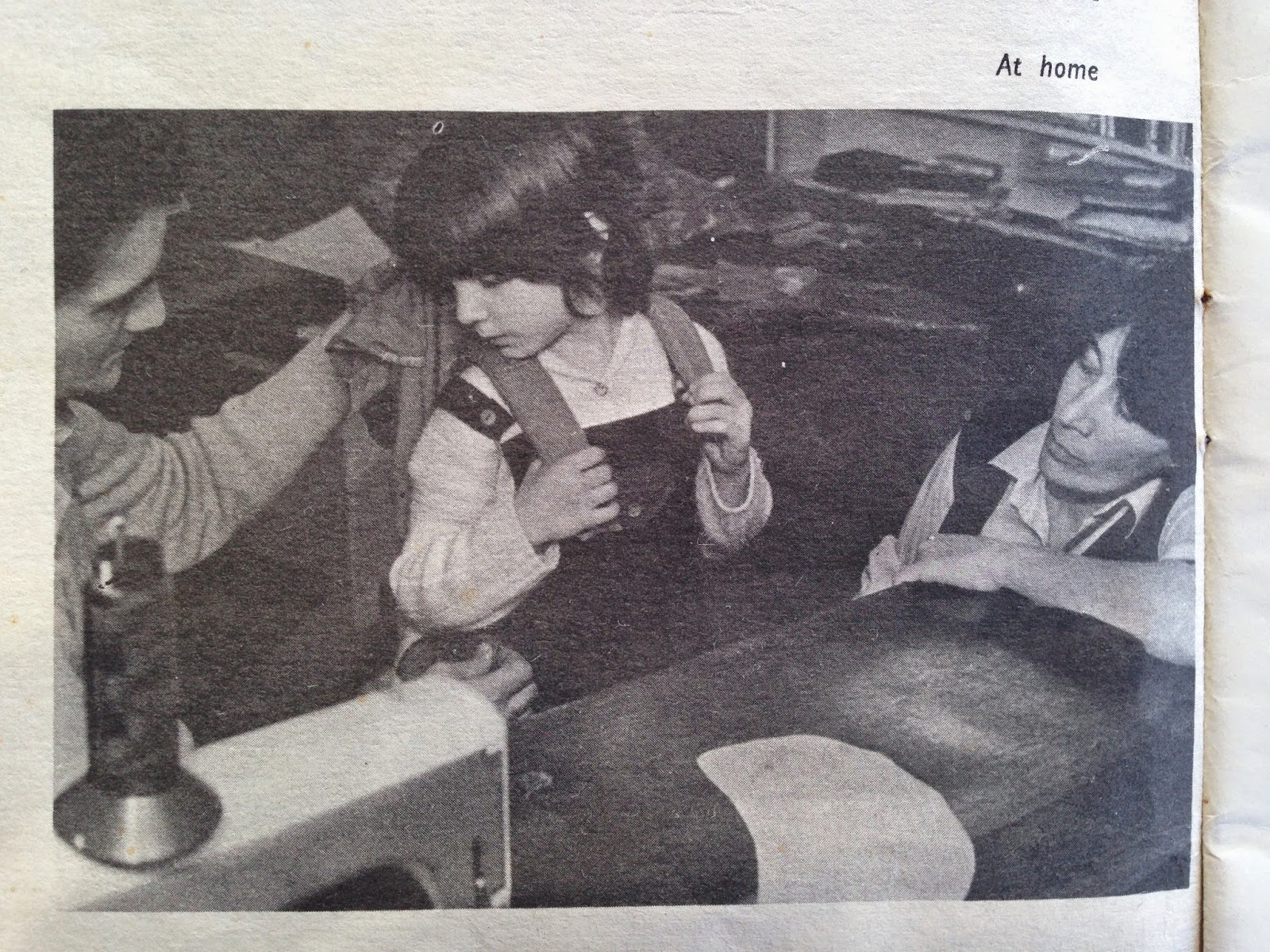